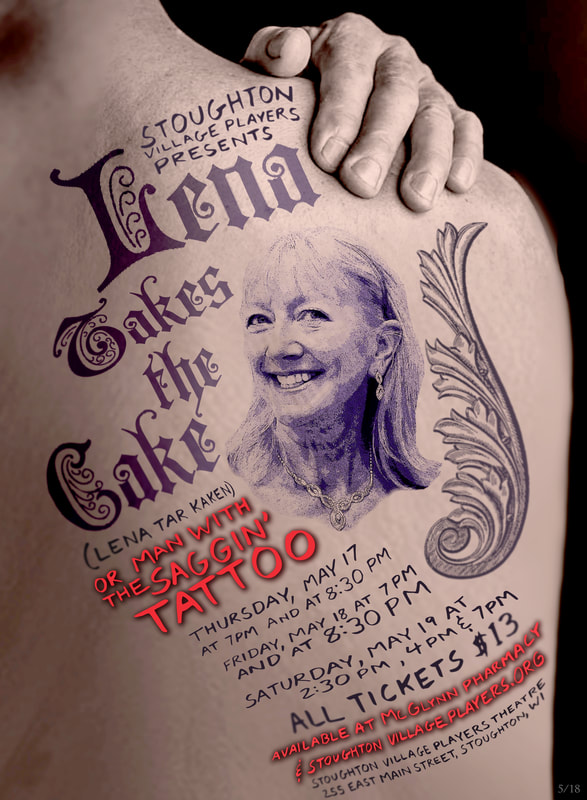 Show Description:
Each Syttende Mai, the Stoughton Village Players explore new ways a small Wisconsin town can survive with so many “less-than-genius” townspeople. This year’s production is no exception.

Lena Takes the Cake (Lena Tar Kaken) or Man with the Saggin' Tattoo starts with an unusual funeral and ends with a disastrous bakeoff as Ole (Merlin Luschen), Lena (Arlene Minor) and friends make one bad decision after another.

Ole’s Aunt Hildur used the same award-winning recipe for years but, now that she has passed, some of the ladies in town (Kathy Horton, Georgean Pentel-Nicholson, Bethany Pluymers) want to find it and use it for themselves. Their plans assume that Ole may be the source and their extra attention to markings on his body is misinterpreted by their husbands (Gary Smithback, Warren Kmiec, Leo Endres).

Directed by Hill and Smithback (with a set by Jeff Horton and Margaret Jamison), the show has all of the parts that audiences have come to love: horrible puns and wordplay, creative set pieces, cool technical and visual elements and, most of all, characters that try to do the right thing but do it in all the wrong ways… with Norwegian-ish accents that defy description.