In the fall of 1972, a dozen people met in the living room of Dick and Mary Lou Fendrick. The group comprised teachers, business people, state workers and others. The task was to form an adult community theater group. The group was to provide an opportunity for Stoughton people to produce plays. With the help of some professional theater specialists from the university, The Stoughton Village Players was formed.

The group did a small production, Spoon River Anthology, in the basement of the old Junior High School in 1973. Then in January of 1974 the group staged their first major production in the auditorium of Stoughton High School, A Thurber Carnival. The show was a big hit. This production was followed by three more shows at the high school, including the first SVP Syttende Mai show.

In 1974, the group's president, Tony Hill, made arrangements with then Stoughton mayor, Liniel Cooper, to convert the unused upper floor of the Senior Citizens Center (which was housed in the old Our Saviors Lutheran Church) into a performing theater. The group then went to work, building a stage, installing theater lighting and generally creating what turned out to be an intimate and wonderful space for theater. In the fall of that year, SVP produced Laura on that stage.

For the next 20 years, the group, as a guest of the city, produced almost all of their shows in this space, at the corner of Division and North Streets, which came to be known as the North Church Playhouse. But in the early 1990s, Stoughton moved the Senior Center to its current home at the corner of Main and Page. Having no need for the old building, they offered it to SVP with the stipulation that they renovate it and bring it up to code. After an engineering study that showed the cost of this to be around $200,000, well beyond the group's means, the Players were forced to decline the city's generous offer.

For the next four years, the group staged most of it productions at the Stoughton Opera House. But when the Opera House received a grant from the Jeffreys Foundation allowing a complete renovation of the historic space, the building had to be closed during the restoration.

Without a permanent place to perform, the group was homeless. They staged one show in the high school's cafetorium, but that was not a long-term solution. 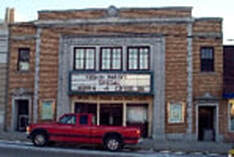 Then in 1999 the group was offered the use of the old Badger movie theater on Main Street at no charge. The building, which is on the National Register of Historic Places, was built in 1921 at the height of the silent movie era. It served Stoughton for three quarters of a century as a movie house, then SVP moved in. At first this was viewed as a temporary move, but after five very successful years staging over a dozen fantastic shows in the space, the group decided to make this arrangement permanent.

Not only did the group plan to take ownership of the building, but they also decided to restore the facade of the aging structure to its original look and condition. Additionally in 2010 Stoughton Village Players proudly completed the second phase of the building's major renovation, made possible with the ongoing support of the audience, patrons and volunteers. The beautiful and classy upgraded look debuted during The 25th Annual Putnam County Spelling Bee production.

• Painting the ceiling black to clean up the look and keep the focus on the stage
• Removing, cleaning, bench-focusing and fixing all the theatrical lights
• Building a stage extension to bring productions closer to the audience
• Painting the walls and trim throughout the theater, aisles and lobby, changing it from mauve and maroon to different shades of blue
• Replacing and repainting the SVP logo in the auditorium
• Adding a gold trim board in the auditorium
• Adding new art deco-style curtains to the interior doors
• Adding curtains in front of and behind the ticket booth
• Recarpeting the entire area from lobby to stage
• Adding new seats with good padding, cool fabric and aisle lights in the arms
• Re-stenciling the lobby to keep the art deco theme and recognize the theater's start in the 1920's
• Adding new art and other interesting design features to the bathrooms
• Fixing up the seating area at the top of the main aisle with paint and new curtains
• Updating all the historic posters in the lobby and aisles
• Painting all floors and repairing lots of other areas where it was needed

Stoughton Village Players was very thankful for all the people who contributed time, effort, sweat, planning/constructing/designing/artistic expertise and, of course, dollars to reach their 2010 goal. Outside vendors were also a big part of the final project with special thanks to Stoughton's Sensible Painting and Premier Flooring.

Renovations didn't stop there. In following years, SVP has continued to improve the theater in a myriad of ways. Backstage upgrades have included men's and women's dressing rooms. In both the backstage and lobby area, additional bathrooms have been installed to serve both the patrons and the actors. Efforts are always being made to improve backstage, costume and prop organization.

Stoughton Village Players is honored to share their time and talent bringing the best of the burbs (Madison Magazine, 2016) to the Stoughton community. SVP encourages people to continue to attend Stoughton's arts and theater events/venues whenever possible -- one of the many fine offerings that make Stoughton a unique and great place to live. The Players look forward to extending the group's legacy far into the next century, offering a communal performance space for live drama, comedy and music while fulfilling the artistic needs of the community.