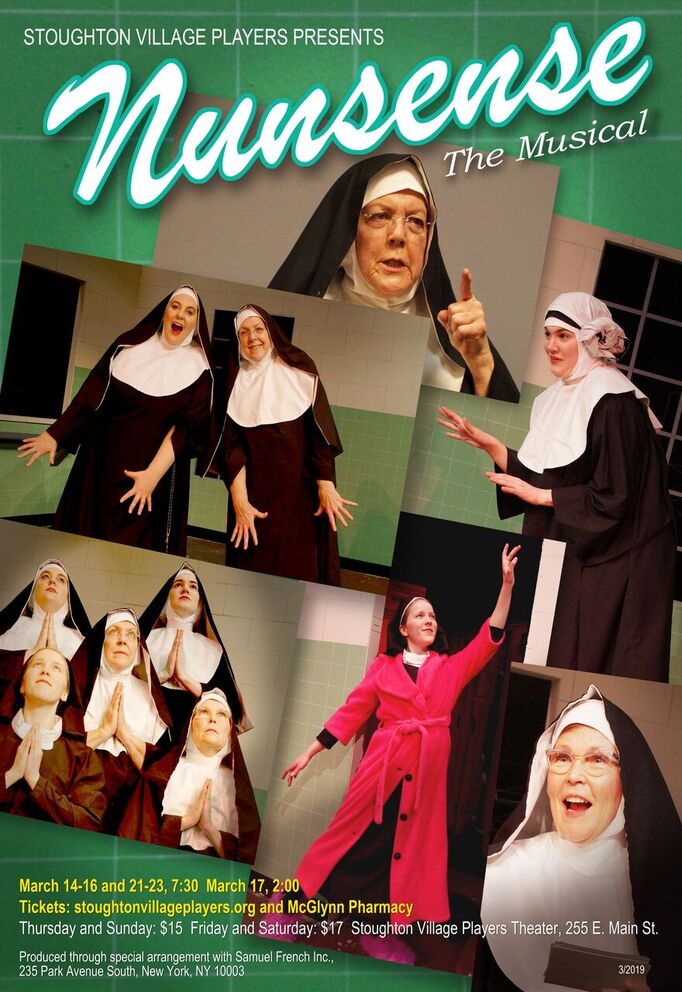 Show Description:
Nunsense​ is a musical comedy that follows the antics of five nuns from the Little Sisters of Hoboken convent as they host an emergency fundraiser variety show.

The complicated reason for needing the money involves tainted soup, burial of most (but not all) of the poisoned nuns, purchase of a plasma TV and bodies still in the freezer. Dollars must be raised before the Health Department steps in, so our well-meaning nuns-with-Broadway-ambitions rise to the occasion. It’s all done in fun with slight irreverence and some poignant moments where we learn more about these sisters and their lives.

According to Director Dan Prueher, “Nunsense is a show-within-a-show where the performers interact with the audience as part of the “benefit.” The nuns also needed to find a location for this emergency production and found a slot at a local school already set for an entirely different play. Very confusing, chaotic and wonderful.”

The old-time cafeteria set will remind many of their own grade school experiences complete with menus, a lunch line and posters with motivating messages. The Ecumenical Orchestra plays in the kitchen among the hanging pots and pans, and the ushers are all members of the town and parish.

You don’t need to be Catholic to enjoy the earnest struggles of these sisters to do the right thing in all the wrong ways. However, there may be an extra level of recognition for anyone who attended or spent time in a parochial school. As they say in the opening number, “Nunsense is habit-forming.”
Cast:
Kathy Martin Horton:  Mother Superior
Kirsten Short:  Sister Mary Hubert
Abi Johnson:  Sister Robert Anne
Bethany Pluymers:  Sister Mary Amnesia
Amanda Zasada:  Sister Mary Leo